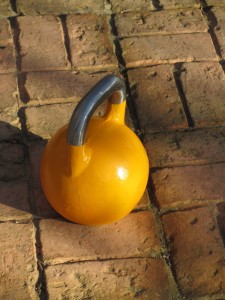 While some people are “in the know” about Kettlebells, there is a large majority of people who look at me blankly when I talk about them. So here is a little bit of information about them to helpfully clear the mist of confusion.

Kettlebelling is an exercise method where a weight with a handle (see the above picture) is swung in and around the body. Having to accelerate and decelerate the weight targets certain muscle groups (depending on the exercise) as well as forcing your core to work hard to keep yourself in control.

Kettlebells are not “new”. It is an old Russian training technique that has been used by athletes and military forces for years. In fact the term Kettlebell first appeared in Russian dictionaries in 1704. Over the last decade or so it has also become very popular with Hollywood celebrities like Jennifer Lopez, Madonna, Matthew McConaughey (and the Spartan cast of “300”) and this has caused it to become trendier in the eyes of the public and the fitness industry. The reason for this is,  unlike other exercise “fads”, there really are amazing benefits to be gained from Kettlebelling as it creates long, lean muscle tone as well as kick ass fat burning.

Where Kettlebelling has an advantage over traditional free weights is that it develops functional strength rather than “gym” strength. A lot of traditional free weight techniques get you to isolate specific muscles to be trained. While this will undeniably strengthen those muscles worked, this isn’t how a body naturally works. In real life when we move, lift, run or throw we use a chain of muscles that all work together. A chain is only as strong as its weakest link, so if you only train specific links (as in standard free weights), you will get imbalance and reduced overall strength. This is where Kettlebelling really shines as its techniques look to work the body as it is supposed to move. A lot of the exercises work out the Posterior Kinetic Chain - which in real world terms means our Hamstrings (back of thighs), Glutes (Bum) and our Erector Spinae (Lower Back).  Many Kettlebelling moves place a lot of emphasis on this area of the body, and this is one of the real gems of training this way as this is often an underworked areas but is conversely SO important in contributing towards so many actions (running, throwing, jumping).

The simplest and most traditional Kettlebell technique is a Two Handed Swing, and in fact this movement also serves as the basis for many other more advanced lifts. This is where the bell is swung between the legs and then driven forwards by snapping the hips forward. Please note that the arms and shoulders are used only to attach the Kettlebell to your body, the power and strength for the exercise all comes from the hips. 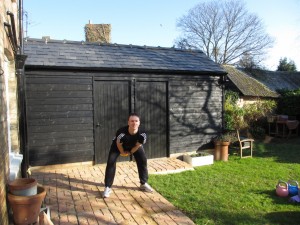 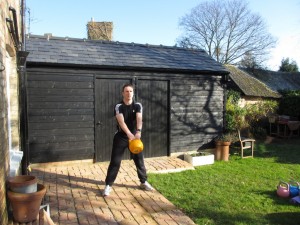 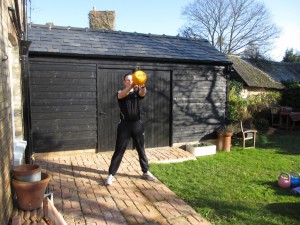 As can be seen from the pictures this is an active and dynamic movement and will work your Posterior Kinetic Chain (as mentioned earlier the Hamstrings, Glutes and Erector Spinae). This will strengthen those areas and feedback into many day to day actions: Running, Jumping, Skiing …. the list is so long!

This other benefit of all this movement is its effect on your heart rate; as this will definitely get yours going! I regularly get my heart rate into the high 170s. To give you an idea of how much “fat burn” you can achieve In one study, Kettlebell enthusiasts performed a 20 minute snatch workout and burned on average, 13.6 calories/minute aerobically and 6.6 calories/minute anaerobically during the entire workout – equivalent to running a 6-minute mile pace.

So hopefully this has cleared up a little bit about what Kettlebelling is. If not, YouTube is a great medium to see how it has stormed the exercise world.